History of Kuala Lumpur Bar: The Story You Should Know

The Kuala Lumpur Bar traces its roots to the Selangor Bar Association which was established in 1903.

Prior to 1896, any legal cases regardless whether with large importance or complexity had to be commenced and carried out without legal assistance of any kind. It was left to the management of the litigants themselves.

This was due to a Circular by the Acting Resident of Selangor (Circular 17.5.1892) in which he declared that “the settled policy of the Government of the Protected Native States (i.e. the Federated Malay States) not to admit lawyers to practise in the States”. Thus, litigants had to conduct their own cases in the courts.

Notwithstanding the restriction by the Acting Resident of Selangor, records show that locals had appeared as counsels for litigants. In Raja Bot v Ah Chan (1889)[1], one Raja Bot acted as an attorney for Abdul Kadir of Lukut to recover the sum of $1000 owed to Haji Yahya, the deceased father of Abdul Kadir. The Magistrate held that the Defendant, a mining towkay, had admitted the debt and the debt was not barred by laws of limitation.

However, the restriction had caused considerable problem to investors in the Federated Malay States. The Magistrate Court Judges took very brief notes and their grounds of judgement were also brief and without much discussions of law and facts.

To protect their rights and capital invested in the state of Selangor, the Selangor Planters’ Association made an appeal to the Government to admit a limited number of lawyers of position and standing to practise in the Courts of Selangor. The Association complained of the utter stagnation in the Selangor Court and the enormous accumulation of arrears[2]. In a letter dated 2 December 1896 to the Government Secretary, the Selangor Planters’ Association stated that they had resolved that “Government be urged to throw open the Magistrates courts of the Federated States to legal practitioners of status and position, the large vested interests of capitalists deserving in the opinion of this Association, more adequate protection than that afforded at present”[3].

The establishment of the Judicial Commissioner’s Court in 1896[4] paved the way for lawyers, who were already practising in other states such as Singapore and Penang, to practise in the Federated Malay States (“FMS”). Their right, however, was not extended to the lower Courts thus in 1897, John Parsick Joaquim, C W Hewgill and Vernon Francis Page (also known as V F Page — a lawyer who practised in Bangkok) mounted a challenge to have the right to appear in the criminal Lower Courts[5]. The then-Judicial Commissioner, Lawrence Colville Jackson (L C Jackson)[6] granted John Parsick Joaquim’s application to have the right to appear at the criminal Lower Courts. Soon, the lawyers were also granted the right to appear at the civil Lower Courts.

In 1903, lawyers practising in the state of Selangor formed the “Selangor Bar Association” with C W Hewgill and G Harold Day as their first President and Honorary Secretary[7], respectively. 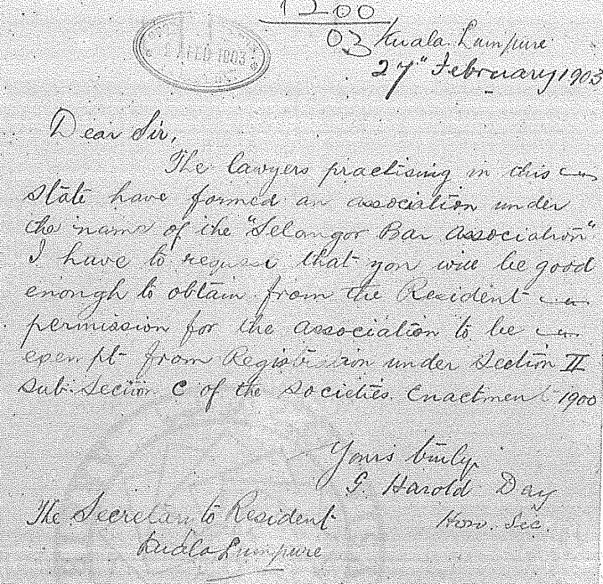 C W Hewgill was called to the Straits Settlement Bar in Singapore in 1893 before moving to Kuala Lumpur to set up his practice in 1896. He had the honour of being the first advocate in private practice to appear at the Judicial Commissioner’s Court[8]. The Judicial Commissioner’s Court was the final Court of Appeal for the Federated Malay States during that time and was later replaced by the Supreme Court in 1905.

C W Hewgill later established the firm of Hewgill and Day with G Harold Day until it was amalgamated with the firm of Messrs Bannon and Bailey in March 1917[9], [10]. Hewgill died some time in the early 1930s.

The early members of Selangor Bar Association were active in the social and legal arena. Records indicate that the members were actively engaging the then-Government on matters concerning legal practice such as opposing to new rules allowing civil servants to be admitted to the local Bar, suggesting that posts of Senior Magistrates should be confined to “barristers, advocates and solicitors who had carried on their profession for at least five years at the time of appointment” and extending time to file appeal from seven days to 21 days.

On 21 February 1925, a meeting was held by a group of advocates and solicitors practising in Selangor and from the meeting, it was resolved that an association, also called the “Selangor Bar Association” be formed. The Office Bearers were T H T Rogers, B J P Joaquim, A S Bailey, Vivien Mackie and William George Warren Hastings[11]. It is unknown from the records why these advocates and solicitors had formed the “Selangor Bar Association” as it had already been in existence since 1903.

According to the Rules of the Association of the Selangor Bar Association[12], the objects of the Association are to “provide its members in the practice of their profession with such amenities as may from time to time be found desirable, and generally to advance the interest of Advocates and Solicitors practising in the State of Selangor”. 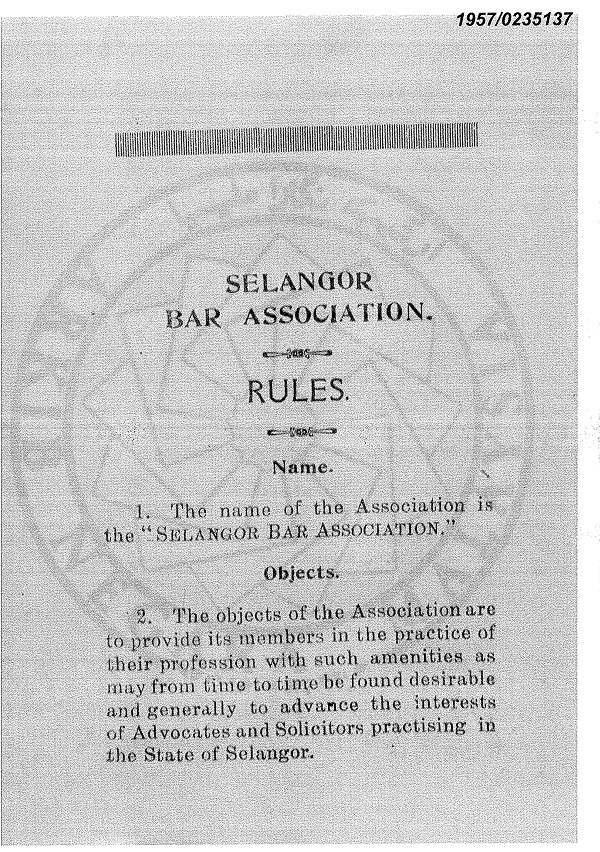 The premises of the Association were “room or rooms in the Supreme Court of Kuala Lumpur”. The “entrance fee” for ordinary members was $15 and subscription was fixed $2 per mensem (per month), payable half-yearly in advance. An ordinary general meeting of the Association was held every year in the month of January and only three ordinary members were sufficient to form a quorum.

This new Selangor Bar Association was also exempted by the Selangor British Resident from registration under the Societies Enactment 1913[13].

It is unfortunate that the records of the early years of the early Selangor Bar Association and Selangor Bar Committee are lost. The earliest record held by the Kuala Lumpur Bar is 1956 where the late R R Ramani was the Chairman together with four other committee members namely M N Cumarasami, S M Yong (who later became a Judge) and N A Marjoribanks. The Advocates and Solicitors Ordinance 1947 (“1947 Ordinance”) only allows four committee members in the local State Bar.

The complete rolls of Chairman and Committee members before 1947 were also no longer available. However, based on the newspaper reports and records of the National Archives, the Office Bearers of the Selangor Bar Association of 1925 were T H T Rogers, B J P Joaquim, A S Bailey, Vivien Mackie and W G W Hasting. In 1934, W G W Hastings, K K Benjamin and A K Sen were elected as members whereas S M Yong was appointed as Honorary Secretary. B J P Joaquim, T Rajendra and J T Toswill were elected members of the Committee and P C Au-Young as Honorary Secretary in 1937. 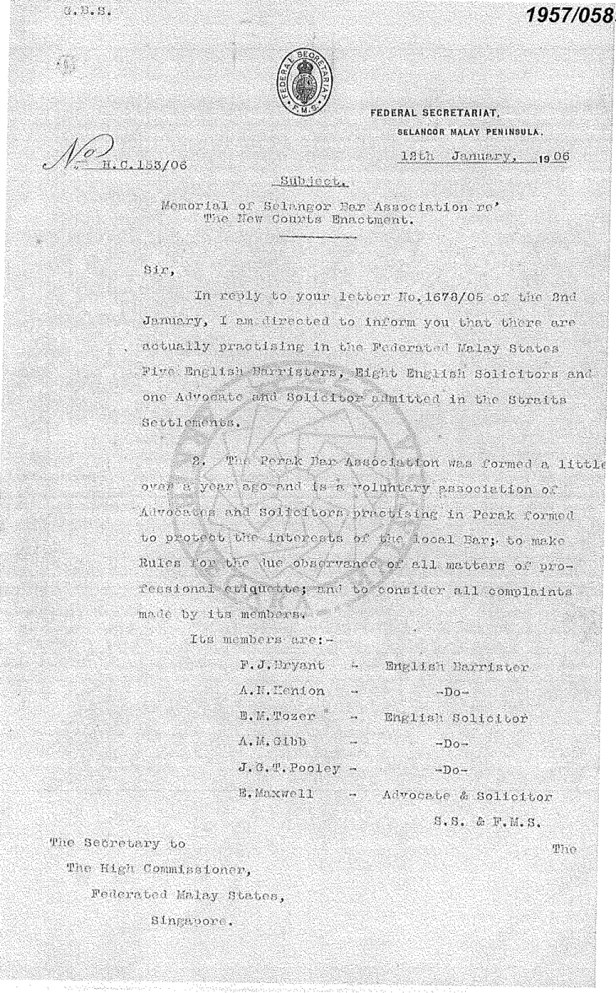 The rolls of the FMS Court show that Hoosein Hasannly Abdul Cader[15] (also known as H H Abdoolcader) was the first Asian (and also Indian) name appearing on the rolls (admitted in 1915). However, H H Abdul Cader (later Sir) practised mainly in Penang. 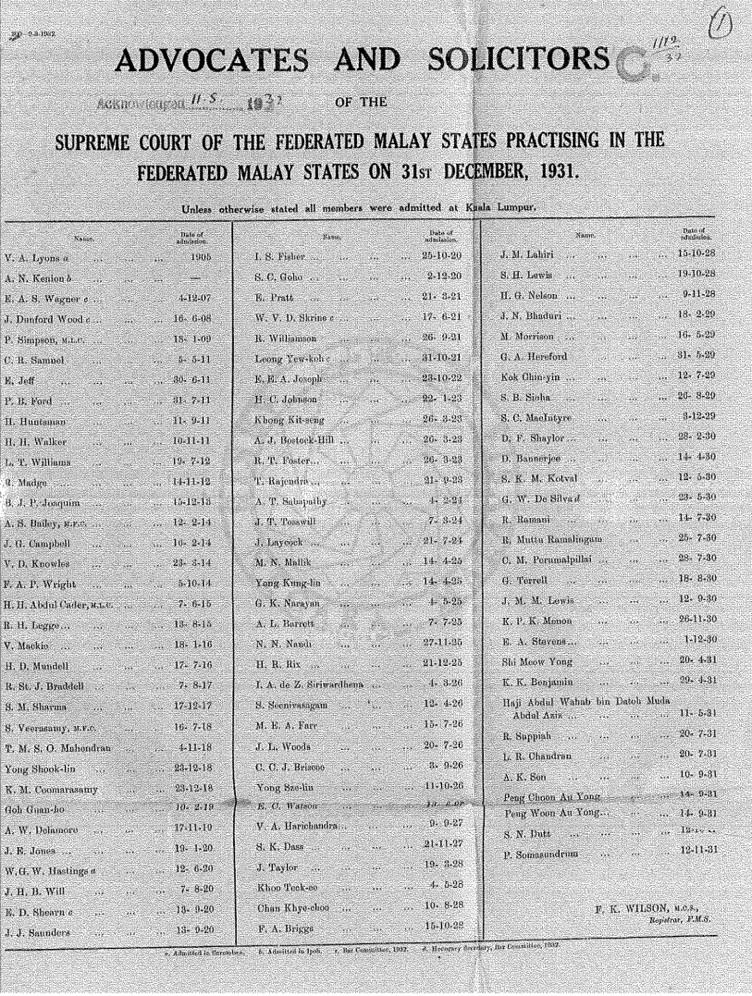 Raja Musa b Raja Haji Bot was the first Malay to be called to the FMS Bar in 1929 and also the English Bar[16]. He later became the first Malay to sit on the Bench of the Supreme Court of the FMS and had subsequently been appointed Professor of Law at Raffles College. During the Japanese Occupation, he was appointed a Judge of the Supreme Court, Singapore. He passed away in 1943.

Upon the advent of the 1947 Ordinance, the Selangor Bar Committee was established.

The 1947 Ordinance requires every annual meeting of the local bars be presided by the most senior member present. The practice has now been abolished by the Legal Profession Act 1976. In 1956, M N Cumarasami (admitted to FMS Bar in 1929) presided the annual meeting of the Selangor Bar as he was the most senior member present[17].

In 1956, the subscription fee for Selangor Bar was $2.50 per month. In 1970, it was $30 per annum. Such subscription fee was not mandatory and members were able to practise without payment of such fee in those days. The Bar Committee was tasked to collect outstanding payments from time to time.

The usual complaints relate to the misappropriation of funds by members but some are out of the ordinary such as: 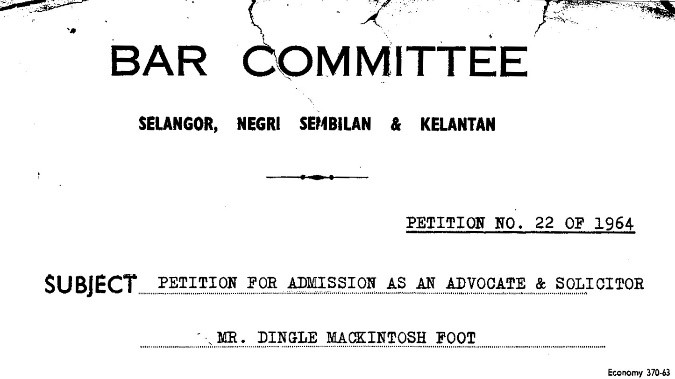 Severance of the Selangor and Federal Territory Bar

Kuala Lumpur was made a Federal Territory on 1 February 1974. When the Legal Profession Act 1976 came into force in 1976, it was provided for under section 68(3) that all lawyers practising within the Federal Territory were deemed to be members of the Selangor State Bar.

In the 1986 Annual General Meeting of the Federal Territory and Selangor Bar, it was mooted whether a separate Bar be established for all practising members within the state of Selangor. Members practising in the state of Selangor felt that they will be better served with a committee that comprises more Selangor Bar members and furthermore, most Bar events were held in Kuala Lumpur.

Written opinions were provided by Mohd Ismail Shariff and Anthony Rocky Fernandez on whether the then-Legal Profession Act 1976 allows the severance of the Selangor and Federal Territory Bar.

Section 68(3) of the Legal Profession Act 1976 stipulates that all members practising in the Federal Territory shall be deemed to be members of the Selangor State Bar. Thus it was decided that section 68(4) be introduced to allow the establishment of a separate Bar. The original section 68(4) is reproduced below in its original form:

The said amendment was then forwarded to the Attorney General and in 1992, section 68(4) was introduced to allow the establishment of the Kuala Lumpur Bar. The words “Kuala Lumpur” were added. Section 68(4) is the only provision in the Legal Profession Act 1976 that specifically mentions a State Bar.

Chairmen of the Kuala Lumpur Bar Committee since 1992

[6] L C Jackson QC was the first Judicial Commissioner albeit a short one. He died in 1905 after illness struck him. He was described to be organically sound, and was in good health. He had two defects namely he had little range of hearing and had varicose veins on his legs (http://ofa.arkib.gov.my/ofa/digital/asset/154198)

[11] Also known as W G W Hastings. He established Lovelace & Hastings in 1913. Hastings was a temporary Judge of the Federated Malay States Supreme Court and Federal Councillor. He died in 1952.

[13] Application made via a letter dated 9 March 1925, from Vivian Mackie, a Partner of the now defunct Messrs Freeman & Madge and also the then-Honorary Secretary of the Selangor Bar Association

[17] M N Cumarasami was called to the Federated Malay States Bar in 1929 and passed away in 1962. The then-Prime Minister, the late Tunku Abdul Rahman moved a tribute to him in Parliament as he was an old member of the House. (Hansard 20 January 1962, Vol III, No 33).