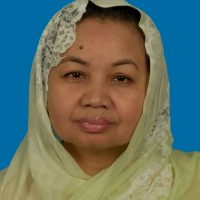 Fatimah Sulaiman, the youngest daughter of Tuan Hj Sulaiman Mohd Don and Hajah Maimunah Awang was born in Muar in 1958 and read law at the University of London whereupon she graduated with an LL.B (Honours) in 1982. In 1983 she was called to the English Bar as an utter Barrister of the Honourable Society of Middle Temple, United Kingdom. In 1984, following her period of pupillage, she was admitted as an Advocate and Solicitor of the High Court of Malaya.

Fatimah’s admission as an Advocate and Solicitor of the High Court of Malaya has indeed given great satisfaction and immense pride to her late father, Hj Sulaiman Mohd Don, an ex-government servant who rose from the rank and file of a clerk to ultimately become the Pengarah Tanah & Galian Selangor when he retired in 1977 who at one time harboured great hope to become a lawyer himself. In fact upon completion of his A Level at the Muar High School, Hj Sulaiman was given a place in Cambridge University to read law but unfortunately World War 2 broke out, which shattered the young man’s hope and dream. The old man therefore saw in Fatimah’s success in becoming a lawyer the only one in her family as a fulfilment of his own dream!

In 1989, she returned to active legal practice by founding the legal firm of               Messrs Fatimah, Kei & Leong with two other partners, namely Kei Suan Lye and Leong Tuck Kong. As a founding partner of the firm, she was inter alia entrusted with the supervision of all areas of law practice by the firm and also acted as company secretary and trade mark agent to the firm’s clients. She provided advice and counsel for a portfolio of clientele which include private and public companies on a wide range of legal matters, including negotiating and drafting, advising and acting on merger and acquisition matters, restructuring exercises, compliance with regulatory frameworks, dispute resolutions and providing independent views on risk management.  She was also privileged to work with other lawyers in advising the Government and the various shareholders of Cyberview Sdn Bhd and Setia Haruman Sdn Bhd on land matters (in particular land acquisition procedures) in the development of the MSC Super Corridor in Cyberjaya.

Her experience also included but not limited to acting for companies and consortiums which were entrusted to implement special projects in Namibia and South Africa, based on a Government to Government level of co-operation and collaboration.

As an active voluntary social worker, she has undertaken pro-bono works by acting as Honorary Legal Advisor to Rumah Amal Cheshire Selangor since 1990, where she was actively involved in one of the more notable projects embarked by the Association, the Economic Empowerment Programme for the Disabled Youth.  She was also actively involved with Rumah Amal Cahaya Tengku Ampuan Rahimah (RACTAR) where she assisted the association with their legal matters and helped to raise funds for the orphans under the care of the association.

But her most active involvement with voluntarism was the humanitarian works and activities she has undertaken with the Malaysian Red Crescent Society (MRCS).  She started as a mere fund raiser with the organisation about twenty years ago and then rose to become its National Honorary Treasurer from 2004 till 2010. She has also served as the National Chairman of the International Humanitarian Law (IHL) and Legal Affairs Committee of MRCS where she participated in several national and international forums on IHL. She provided assistance to the Government in setting up the inter-ministerial National IHL Committee and helped organised international forums in Kuala Lumpur such as the Roundtable on IHL and Asia-Pacific International Forum on Disaster Law (IDRL); assisted the Malaysian Council of Security in the Prime Minister’s Department (MKN) on the proposed draft National Disaster Act; and served regularly as a judge in the International Law Moot Competition (National level) and the Jessup Moot Competition organised by the various universities in the country in collaboration with the International Committee of Red Cross (ICRC). She has also served on several Committees in MRCS, contributing her experience and expertise in various leadership positions on a voluntary basis.

From 2010 and until her untimely demised, she was the Chairman of the Malaysian Red Crescent-Selangor Branch, after having served as the National Honorary Treasurer of MRCS. As Chairman, she was responsible for the revitalisation of the MRCS-Selangor Branch having presided over its evolution from a first-aid oriented organisation into a more dynamic socio-emergency Branch especially in harnessing the spirit of volunteerism amongst its members and the advocating of humanitarian endeavours. Her efforts in introducing progressive changes within the Branch in order to meet the increasing demands of changing times have undoubtedly borne its fruits.

Throughout her years with MRCS, she together with her fellow members in the organisation’s  National Executive Board formulated and nurtured the strategic directions of MRCS as a premier humanitarian organisation in the country with various engagements such as mapping out post war rehabilitation assistance programme for the Iraq war victims, providing international relief aid in response to international appeals vis-a-vis the Tsunami Disasters in Japan and Acheh, Indonesia, earthquakes in Pakistan, Iran and China, the Cyclone Nargis in Myanmar, the Haiyan Typhoon in the Philippines and the victims of the armed conflict in Gaza, Palestine, to name a few. On the local front, they led the delivering of support in the emergency phases as well as the rehabilitation and rebuilding phases of disaster management during the floods in the northern States of Peninsula Malaysia as well as the recent big floods in the East Coast. She was appointed that year as the Deputy Chairman for the “Collaboration of NGOs for Relief Distribution for the Johor Floods” by the then Minister of Women, Family & Community Development.

In addition to this, she was the Assistant-Secretary of the Malaysian South-South Association (MASSA) and the Editor of its newsletter, a position she held until her death. In her capacity as editor she helped promote and enhance co-operation between the private sectors from Malaysia and Latin America and other South-South countries on matters pertaining to the economy, trade and culture, in collaboration with those countries’ respective embassies in Malaysia and organisations such as MATRADE and MITI.

While serving on the Governing Council of the Malaysian Institute of Directors (MID) from 2001-2002, she presented a paper on Corporate Governance in Bali in 2002 and made proposals pertaining to the regulatory frameworks and instruments pertaining to Malaysian director’s roles and responsibilities.

In appreciation of her dedication and years of active voluntary service to MRCS, she has been honoured with several MRCS awards and accolades. For her public service to the nation, she was a recipient of two Federal Government awards namely, Kesatria Mangku Negara (KMN) and Panglima Jasa Negara (PJN) which carries the title Datuk bestowed upon her by His Majesty the King of Malaysia in 2006 and 2016 respectively.

On the artistic front, she was also active in the Southeast Asian Ceramic Society (SEACS), West Malaysian Chapter, for 10 years (2005-2015), initially as its                 Vice-Chairman in 2005 and the following year till 2015 as Chairman having taken over that position from her illustrious predecessor and fellow lawyer, the legendary             Tan Sri P.G. Lim who was elevated to the position of Honourable Patron of the society. During the tenure as Chairman, Fatimah lent her considerable and invaluable legal expertise and experience (with the MRCS), to help the society in updating and amending its constitution which has hitherto never been updated since its inception in 1973.

And as art collectors, we have been actively collecting Malaysian artworks since the early 1990s, with special focus on the works of the country’s contemporary artists. Our art collection, together with books, monographs and catalogues on art, photography and design is housed discretely in Ruang Pemula (RuPé), our pioneering art space located in rented premises below my legal firm, in the outskirts of Kuala Lumpur.  This joint endeavours is our labour of love which has indeed given us so much pleasure together and other intangible rewards, for we do not collect art for investment purposes.

As is evident by now, Fatimah was indeed a fighter for the various noble and humanitarian causes enumerated above.  As such we must bear witness to that kind of commitment and dedication, because it is simply a rare commodity in our ever more materialistic pursuits.  For such selflessness I have often quipped in jest to friends and relatives in describing her as “a full time charity worker and a part time lawyer”, especially in the last 10 to 15 years of her life.

When sometime in early December 2015, Fatimah was diagnosed with stage 4 cancer following a series of persistent and excruciating stomach pains. She took the devastating news with calm and great self-control or fortitude. She instructed me not to divulge this information to others save for very close relatives and friends. This is simply because she doesn’t want others to take pity upon her condition.

As in good health she was also a fighter during ill health. She fought the debilitating effect of the aggressive cancer cells which have by then spread from her endometritis (which diagnosis had earlier lead to the removal of her womb) to her lymph nodes, with verve, grit and also wit. She still doggedly pursued her humanitarian works for MRCS despite being wheelchair bound in the last 2 months of her life. One notable example was her attendance at the Beach Club Cafe in Jalan P. Ramlee on 10 September 2016 for its 17th Charity Jam Session 2016 where MRCS-Selangor Branch (along with a few other charitable organisations) were to be the beneficiary of the proceeds from that session. She had attended that session on wheelchair after being discharged from Gleneagles Medical Centre only in the afternoon of that day. Despite being terminally ill she tenaciously went on with her humanitarian works until she finally succumbed to the cancer on 27 September 2016.  Her tenacity, dedication and commitment in the last few months of her life can best be described by the title of A. Samad Ismail’s novel, “Patah Sayap Terbang Jua”!   Her untimely demised has certainly left a huge hole in both my 17 year old son, Iqbal’s and my life and only time may perhaps be able to heal our deep lost.

It’s trite to say, that one’s life is not measured by its length but by its quality. In this we are indeed comforted by Fatimah who has lived a full and committed life. Her life may well be exemplified and captured succinctly and beautifully by the following two lines from Chairil Anwar’s famous poem, “Diponegoro”:

In Fatimah’s case, we may with the necessary apologies amend it slightly to read as follows:

This may well be a most fitting epitaph for my dear and beloved Fatimah.