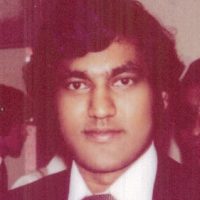 On 11 January 1951, the Munusamys’ who lived in the Elmina Estate in Batang Berjuntai which is today known as Bandar Bestari were blessed with another son whom they named GOPAL KRISHNAN. The Munusamys’ were employed as rubber tappers in the Elmina Estate. The hard life that they had to endure to sustain their basic needs did not deter them from providing the basic education to young Gopal.

Gopal was first sent to the local Tamil School in Batang Berjuntai to start his primary education.

For his secondary education Gopal went to an English medium school in Batang Berjuntai and thereafter to Kuala Lumpur to do his Form Six.

Having completed his Form Six, Gopal was employed by the National Union of Plantation Workers and subsequent to that secured a job as a temporary teacher in Batang Berjuntai.

Gopal’s desire to obtain a tertiary education saw him being enrolled as a student in the University College of Buckingham in England. He obtained his law degree in good time and thereafter he moved to London to pursue the Bar course at the Council of Legal Education in 1978.

He was admitted as a member of The Honourable Society of Lincoln’s Inn London and after passing his Bar Examination, Gopal was admitted as a Barrister-at-Law of England and Wales in the Michaelmas term in 1979. During his Call to the Bar, Gopal had the honour of his Call Certificate, being autographed by Lord Denning, the then Master of the Rolls of the Court of Appeal of England.

Upon his return to Malaysia and after completing his pupillage, Gopal was admitted as an Advocate and Solicitor of the High Court of Malaya on 11 September 1980. Gopal practised under the name and style of Munusamy Gopal and Partners until his demise.

Gopal was married to Janiki and they have two children namely Anandha Gopal and Shamini. Gopal and his wife, at all times, gave their best in the up-bringing of their children and guided them to secure the education that they were interested in. With their guidance and proper up-bringing, the children achieved success in the studies that they undertook.

Anandha Gopal took it to the skies and he is today a pilot and a captain in a leading airlines and Shamini is a medical doctor in private practice.

Gopal passed on after a short illness on 2 January 2019 in Ipoh, Perak and to his grieving family members, let us record our sincere condolence and may his soul rest in peace.