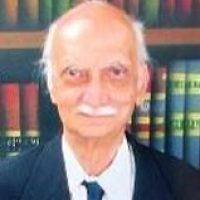 Born into a Sikh policeman’s family in 1931 in Perak, Joga Singh was the youngest among six children. Joga’s proud alma mater in Ipoh was the Andersen School. He was a good sportsman and more than dabbled in cricket and hockey, a passion that he later passed on to his sons. At school, he enjoyed Mathematics and English Literature, two subjects that later heavily influenced his love of Sudoku and crossword puzzles that helped keep his mind mentally agile and alert throughout his life. Many old-timers from his hometown in Ipoh still remember fondly the convivial young Buntong boy on his beloved Norton bike, who made deep and life long lasting friendships that transcended across races and professions.

Joga first began his adult career as a teacher at the Anglo Chinese Boys’ School in Ipoh but decided later in his life to take up law at the University of Singapore, where he graduated in 1966. He served his pupillage in the law firm of Lovelace and Hastings, with his Master, Mr. Lall Singh Muker. On 31 December 1966, he was called to the Malaysian Bar.

Thus began his long engagement with the law and his legal fraternity family, making him one of the longest standing members of this Bar Council. It was a journey that spanned decades and made him a recognisable figure in Courts all over the peninsular in the early years. He first joined Anthony Wilson and Co in Terengganu and then worked in Kuala Lumpur for Syed Husain Al Jaffri and Co. in Medan Pasar, followed by Richard Talalla & Co. He saw a lot of the country then, travelling long distances frequently to attend to his cases in the East Coast Courts. He then became a partner in VP Nathan and Partners in Kuala Lumpur and spent the last part of his professional life in Jagjit Singh and Co. He was a well-known figure at the chappati haunts in Batu Road and also enjoyed the occasional fish and chips at the Coliseum. He was also himself a Master to several pupils who are now established members of the Bar, and with whom he maintained warm and cordial relationships with over the years.

Joga was not a conventional man for his time and yet he was a very traditional and contented family man, with modest wants and modest needs. He raised a daughter and three sons with his wife, Madam Gian Kaur, who all now lead good professional lives because of his solid fatherly contributions and example setting.

Joga passed away peacefully at the age of 87 on 7 October 2019 with his family by his side. He was, from the very first to the very last, a dedicated family man and a proud grandfather. To his friends and family, he will always remain a masterpiece of a man and a father. To the Bar Council, he was a respected member of the legal fraternity. His passing is such a great loss and he is deeply mourned by his family, relatives, friends and members of the Bar Council.