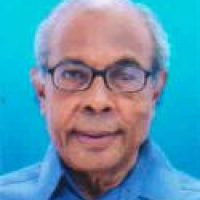 My cousin brother, Paramanathan son of Kathegasu, was a self-made man.

He was born on 13 April 1936 in Tanjung Malim, Perak. This was an auspicious day as it was the Tamil Hindu New Year. His father was a sanitary inspector in government service. His family consisted of eight sons and two daughters. Those were the good old days.

In 1953, his father retired from government service. His father decided to return to his country of birth Ceylon (now called Sri Lanka). But he left three of his sons behind, Tharumalingam the eldest boy who was then already a teacher in Tuanku Muhammad School, Kuala Pilah. Paramanathan who was the fourth in the family was left behind with Paramanathan’s uncle, Karunananthan who was a health inspector in Kuala Lipis, Pahang.

Paramanathan studied in Clifford School Kuala Lipis. One of his classmates Kesavapani, returned as Singapore’s High Commissioner in Malaysia many years later.

In 1956, Paramanathan passed his Overseas Cambridge School Certificate creditably with a Grade 2. He was selected to join the three-year normal class as a trainee teacher. It was an on the job teacher training programme. He had to attend lectures every Saturday morning. He was posted in Kuantan, Pahang.

After qualifying as a teacher, he applied for a position as a labour officer. He was selected. His knowledge of the Tamil language helped him to secure that position. In those days knowing a second language was considered an asset.

Paramanathan served as a Labour Officer in many places. He served in Johor Bahru, Taiping, Seremban, Sungai Petani and Ipoh. In 1982, Paramanathan was promoted and served as an Assistant Director for Labour in Teluk Intan and later in Port Klang.

In Seremban, he lost his heart to one Miss Suseela Nair who was also a labour officer in the same office.

In 1971, Paramanathan and Suseela Nair were joined in holy matrimony at the Kalamandapan at Jalan Scott, Kuala Lumpur.

Whilst serving as a labour officer, Paramanathan was a very conscientious and dedicated officer. He did not succumb to any influence by employers. He made sure that all labour laws were complied with.

While serving as a labour officer, Paramanathan received an award for exemplary service from the Government.

Whilst working as a labour officer, he spent his spare time fruitfully. He studied for his higher school certificate. He passed his exams. He secured a place as an external student of the University of London to study for his LL.B degree. He burnt the midnight oil. Over the years he passed all his examinations and obtained his LL.B Honours degree.

In 1991, at the age of 55, Paramanathan retired as a labour officer from government service. He did not rest content with his pension. He studied full time and passed his CLP examinations. He told me it was difficult for him to remember some names of cases, I suggested to him whilst names of cases were very important, the principles decided were more important.

On 9 November1996, at the age of 60, Paramanathan was called to the Malaysian Bar.

Paramanathan followed a healthy lifestyle. He was careful with his food. He ensured he had a balanced diet. He jogged and practised yoga daily. I did not hear of him falling ill at any time.

Sometime around 1999, he noticed that his left eye was irritating him. He went to see an opthamologist. He was told that he had retinal detachment which was quite advanced. It could not be treated and he lost the sight of his left eye. Despite this, he continued his healthy lifestyle, he jogged and practised yoga daily and had balanced meals. He continued his practice at the Bar.

Unlike most people of his age, he did not see any doctors. This was because he felt fine all the time.

In December 2015, five months short of his 80th birthday, his daughter Premala, an obstetrician and gynaecologist who had come from Australia to visit him found that there was something seriously wrong with him. He went to Bangalore in Karnataka state in India for further tests. The hospital found he had cancer of the aesophagus. It was quite advanced. There was little the oncologist could do.

On 8 January 2016 at the age of 79 years, Paramanathan passed away peacefully in the presence of his family.

After his retirement from government service, and after his Call to the Bar, Paramanathan practised as an Advocate and Solicitor mainly in the employment field for a good 19 years.

After her marriage, Suseela Nair resigned as a labour officer and became a teacher. She retired as the principal of Sekolah Menengah Kebangsaan Vivekananda, in Brickfields, Kuala Lumpur.

Paramanathan’s daughter, Shyamala was herself called to the Bar in 1999. She has now taken over her father’s practice essentially in employment law under the name Paramanathan, Shyam & Associates. His other daughter Premala went to Dublin in the Republic of Ireland to study medicine. She went on and qualified as an obstetrician and gynaecologist in Ireland. Premala is now working in Toowoomba Hospital in Queensland, Australia.

Paramanathan is deeply missed by his wife and two daughters.

Paramanathan is also deeply missed by his relatives and friends who were in the labour office with him and practising with him at the Bar.