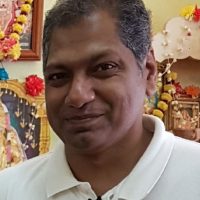 Rajkumar was born to Mr Mathusuthanan and Mrs Margaret Regina on 11 August 1970. He has two brothers and a sister. Missing his exuberant, happy smiling face every day are also his wife and son, Aditya Sean Raj, aged nine.

Rajkumar lived a full and happy life. Always surrounded by peers, friends and family. He kept his schedule packed with activities that made him feel complete and accomplished at the end of every day. He was spiritual and lived every day of his life in gratitude.

He was blessed with good looks and an amazing sharp mind. He was compassionate and loving. Accepting yet never gave up. He was happiest when he was outdoor playing with Aditya and when he was fixing something around the house or the office. Of his worldly possessions, he was most proud of his library in the office and his tool boxes.

Rajkumar was very proud of his childhood as a kampong boy in Kg. Sg. Raya. He had said and correctly too that such days of miracle and wonder will always be the fortune of those born in his era. But that time was short lived as the family moved to Klang where he went to school at the La Salle Klang. Here he built friendships that lasted his lifetime – friends who walked with him till the end.

Rajkumar was a law graduate from the University of London. He was admitted as an Advocate and Solicitor of the High Court of Malaya in 2001 following the completion of his Certificate in Legal Practice and his pupillage in the chambers of Messrs Shearn Delamore & Co.

Prior to practising as an advocate and solicitor, he worked in several capacities in private industry. This included working in University Malaya, IT industry, being employed in a system integration company and thereafter a dot com start up. With this, and with his subsequent practice years, he had had first-hand knowledge of the intricacies of commerce and intellectual property. His practice had initially involved the area of corporate and banking litigation. Subsequently he established his core expertise in intellectual property law and dispute resolution.

A lawyer of over 15 years’ seniority, he first established Law, Raj & Partners in 2002 which evolved into Law, Raj, Teh & Partners. In 2015, following a merger, his firm became Nora Hayati, Raj & Partners and finally in 2017, he established Rajkumar Associates as a sole proprietor.

Rajkumar was very passionate and proud of his involvement with the Orang Asli which dated back to 2011 from when he attended a field exposure organised by the Committee of Orang Asli (COAR) of the Bar Council.

First Case – Kampung Peta in Johore: involving the Jakuns of the Endau-Rompin National Park in Johor. Working with Dr. Yogeswaran, K. Mohan and Steven Thiru, he was able to get a precedent – setting ruling for the Jakun-Orang Asli.

Pos Belatim Temiar Case: Orang Asli Land rights case – the Pos Belatim case of Ulu Kelantan. Rajkumar asked to be involved to learn and contribute. This case too was eventually decided in the Orang Asli’s favour, in yet another precedent-setting judgment.

Saving the Pos Balar – Dakoh Case: During the course of one of the Pos Belatim hearings in Kota Bharu Rajkumar got wind of another similar case that was about to be struck out because the lawyer had discharged himself. Without Rajkumar’s immediate response to take on the case under his firm’s name, the Temiars’ case would have been in certain jeopardy.

The Pos Balar case thus saved, he took on the case with the same professionalism he would have done for any other paying client.

Another case Rajkumar put his hands on was the one involving Kampung Sungai Mai in Pahang. This was one where there was a long standing request by the Jah Huts there to bring their case to Court. Lawyers from the COAR team were a bit hesitant to take up this case for a variety of reasons, mainly to do with the evidential and the (non) strategic nature of the claim. However, Rajkumar stepped in without hesitation.

With the Kampung Peta appeal still pending, and with the state wanting to appeal the Pos Belatim case, plus the ongoing Pos Balar- Dakoh case, and the Sungai Mai case about to start its hearing, Rajkumar had more than enough to handle, especially on a pro-bono, basis. Rajkumar had a sincere and personal sense of responsibility to the plight and cause of the Orang Asli in Malaysia.

Rajkumar is often described by his friends and peers as humble and amiable. He did not seek publicity and did not begrudge anyone else taking the credit for his work. His soft-spokenness, genuine concern and hard work does not escape you.