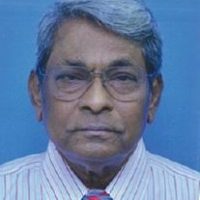 Mr V.T. Nathan (JMN, KMN, FRSPL) was born on 3 November 1937 in Seremban, Negeri Sembilan and was the fourth of six children. He received his primary and secondary education in King George V School in Seremban and upon completion of his secondary education he became a dedicated and well-liked teacher in this school. In school, Mr Nathan took an active part in a number of extra-curricular activities including the scouts movement and encouraged his students to adopt reading as a lifelong habit. In this regard, he was the school’s Scouts Master and was involved in setting up the school library, including the Gurney Library, in Seremban.

In the mid-60s Mr Nathan gave up his teaching career and departed for London to read law at Lincoln’s Inn. Upon successful completion of his legal studies, Mr Nathan returned to Malaysia and was admitted to the Malaysian Bar in 1969. He joined Shearn Delamore & Co as a legal assistant and rose in the ranks to become one of its Senior Partners, specialising in the area of Industrial Law. At that time there were very few practitioners rendering industrial relations advice to employers on a full time basis notwithstanding the fact that there were a small group of industrial law practitioners dedicated to advising employees and unions as specialists in this area of law. Mr Nathan had the vision and foresight to realise that employers too needed specialist practitioners who did this area of work on a full time basis. In this regard, Mr Nathan and his team of specialist industrial relations lawyers filled this niche and made a tremendous success of it.

As a practitioner, Mr Nathan’s knowledge of industrial law was nothing short of brilliant and his tenacity and level of preparation was unmatched. He left no stone unturned and many of his opponents in Court feared him, not because he was a difficult or intimidating person, but because of his knowledge of industrial law and his thoroughness in preparation. He regularly appeared not only in the Industrial Courts but also in the High Courts, Court of Appeal and in the Federal Court. He also was amongst the very few senior lawyers who appeared before the Privy Council. There is no doubt that Mr Nathan was involved in many landmark decisions in Industrial and Administrative Law. Many of his cases are still cited as authorities to this day. Further, he was also a regular speaker and contributor at national and international conferences. His papers were always well received. It was therefore not surprising that our judiciary too respected Mr Nathan’s views. On more than one occasion Mr Nathan was embarrassed when sitting Judges openly asked Mr Nathan to give his opinion in open Court even when he was not representing either party to the proceedings.

Apart from his work as a Senior Partner of Shearn Delamore & Co, Mr Nathan was also a great humanitarian, as is evidenced by his dedicated and sterling service as Deputy National Chairman of the Malaysian Red Crescent Society and as Vice President of the International Federation of the Red Cross. As an experienced and Senior Lawyer, Mr Nathan contributed his expertise in providing legal advice on statutory and constitutional matters involving the International Federation of the Red Cross and the Malaysian Red Crescent Society. In this regard, he was involved in the drafting of policy documents and represented Malaysia in international conferences, meetings and forums. In 1990 he was awarded honorary life membership by the Malaysian Red Crescent Society for valuable services rendered in line with the Society’s principles. I am informed that this rare honour has been awarded to only 26 persons in the past 50 years. Mr Nathan was also an active member of the Jaycees movement and served as Jaycees Malaysia National President in 1975 and later as Pro-tem Chairman of Jaycees Malaysia.

In recognition of his humanitarian work during his lifetime, Mr Nathan was honoured with the JMN and KMN by Duli Yang Maha Mulia Yang Di-Pertuan Agong.

Due to his extensive knowledge of industrial law, Mr Nathan served the Malaysian Employers Federation (MEF) not only as a Council Member but also as its Vice President for many years. In this regard he contributed significantly to various committees in MEF. Mr Nathan also served as an Alternate Member and as a Substantive Member of the National Labour Advisory Council (NLAC). At the regional level he served as Vice Chairperson of the Confederation of Asia Pacific Employers (CAPE) and at the International level, Mr Nathan served as Deputy Member of the International Labour Organisation Governing Body.

Outside his busy schedules at work, Mr Nathan found time to indulge in his passion for gardening, photography and stamp collecting. His significant stamp collection won several national and international awards including the Grand Prix International for his classic Straits Settlements stamps. He was also President of the Malaysian Philatelic Society (MPS) for ten years. Mr Nathan was also one of two Malaysians to be made a Fellow of the Royal Philatelic Society of London.

Mr Nathan retired from active practice in 2000 and many of his colleagues whom he helped nurture as leading industrial relations practitioners, continued to keep in touch with him. He took a keen interest in their progress and took great pleasure in their success as industrial law practitioners.

Mr Nathan passed away on 4 February 2017. He leaves behind Dr. Leila Nathan, his beloved wife of 44 years. He will also be sorely missed by his siblings, nephews, nieces, grandnephews and grandnieces whom Mr Nathan kept in close contact with until his demise.

Mr Nathan’s passing was also a great loss not only to all members of the Industrial Bar but also to the Bar as whole. He was a towering personality and we have truly lost an icon.